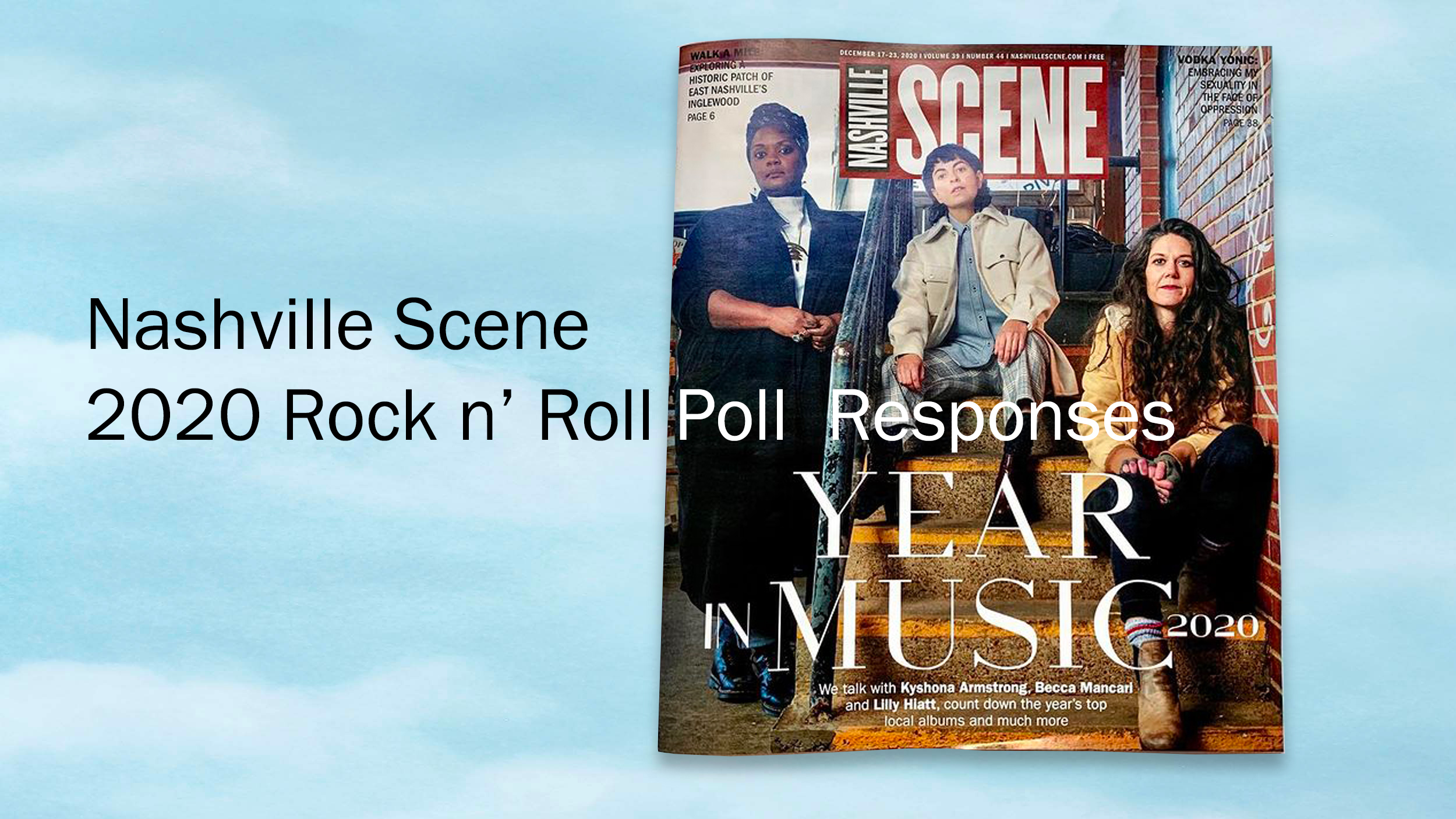 Every year, the Nashville Scene publishes a year-end wrap-up issue looking back at the Year in Music; specifically the local Nashville area scene. It’s always a great read and this year’s issue is no different. They’ve done a great job of compiling profiles on a great deal of local artists across a variety of spectrums.

As part of the issue, they invite members of the music community to weigh in on a “Rock n’ Roll Poll” covering various broad topics. I (Michael Eades) have been invited to participate in this poll for a number of years, with yk Records and We Own This Town serving as my credentials for my subjective opinion. I’m always flattered to be invited and honored to see my name among the likes of so many talented artists, writers and creatives around town.

All that setup to say, the Poll is wonderful but it’s also prone to editing. It has to be! That’s not a slam on what The Scene is doing but any publication that talks to 60+ people is going to have to par it down. I tend to be somewhat verbose (as you can see from the mountain of text above) and that isn’t a great combination for not being edited. Short and Sweet is the name of the game but, unfortunately, I’m not playing that game.

So, I thought it’d be interesting to share the full text of my responses to the Poll. Not for any sort of self-congratulatory measures but because there’s so much music that is released in Nashville in a given year, it’s impossible for one person, one article, one publication to cover it all. My hope is that by seeing the full text of my responses, you can assume that others are responding similarly.

Please do keep in mind that I carry a heavy bias towards my yk Records releases but do my best to support the scene more widely as best I can.

What local artist/band ruled Nashville in 2020?
I know brevity is the soul of wit but there’s an absolute avalanche of phenomenal music from Nashville musicians across every imaginable spectrum for a given calendar year. It’s a delightful problem to have but makes summarizing arduous. That said, my shortlist would be from Black Bra, Tower Defense, Meadownoise, Prudish Few, The Medium and Spencer Cullum’s Coin Collection. Releases from Eve Maret, Oginalli, Ornament, Brineaboy, Juan Solorzano, The By Gods, Fever Blush, Grumpy, Heaven Honey, Luke Schneider, Rich Ruth, Palm Ghosts and Sean Nelson (to name just a few) were all riveting.

What local artist/band is going to rule in 2021?
I predict Nashville hip-hop is going to reach new levels of national awareness. Beyond that, I’ve got my ear out for new releases from Les Ailes, Katy Kirby, Wilby, Nashville Ambient Ensemble and Palm Ghosts.

Whatâ€™s your favorite discovery this year?
That with very little prodding, our community comes together to support one another. Not once did I feel charity fatigue because there’s so much goodness to work our asses off to preserve.

We Own This Town made a concentrated effort to expand our genre coverage this year; moving out of the world of strictly indie rock and trying to consciously play music we were not immediately familiar with. I am happy to report, Nashville music excels in all departments, you just gotta let yourself hear it.

Whatâ€™s helped you the most in coping with the pandemic?
Seeing folks step up with efforts to preserve our sacred spaces made the medicine go down easier. From a practical perspective, podcast binging has been a bright spot – shoutout to the entire We Own This Town family of shows – and the convenience of Drizly, Postmates and Instacart is a privilege I couldn’t be more thankful for. Oh, and Netflix Party (now called Teleparty) is wonderfully fun.

One thing you hope doesnâ€™t come back once the pandemic ends?
Aloof pessimism. Let’s keep looking out for one another, supporting one another and celebrating wins from everyone. Hipster snark should be a thing of the past. Also, please stop auto crossposting to Twitter from your Instagram. It’s useless!

Who deserves more coverage than they got in 2020?
Nashville video creators; anything SECK and Josh Whiteman make should be covered exhaustively. More indie label coverage (Real Sword, West Riff), more metal coverage, more weirdo electronic music! Launch a Concept Album Corner for the Fable Cry’s, Blam Blam’s, Negro Justice’s and Bad Luck Mattresses’ of our scene! But, in all honesty, the Scene does a damn good job of showcasing so much of what is coming out of the community, keep it up.

Whatâ€™s the best music story of the year?
Watching the metamorphosis of DRKMTTR from badass DIY venue to HQ for Nashville Free Store and Nashville Community Fridge was the best lesson of the year, hands down. We all survived a lot this year but somehow they took the worst case scenario and made it into something hugely beneficial for people way outside the music scene. It was inspired and inspiring.

Whatâ€™s your favorite local record of 2020?
Choosing a single local record for a year is torture. I refuse to play this masochistic game so here’s a some heavy rotation notables: Palm Ghosts – Wide Awake and Waiting, Fu Stan – Lockdown, Ron Obasi – Sun Tapes, Oginalli – Pendulum, Eve Maret – Stars Aligned, ElonMusk – …As Your Wanderer Taps At The Invisible Gate, Donors – Self-titled. And, of course, all of the unbelievably great yk Records releases.

Whatâ€™s your favorite local song of 2020?
There can not be just one! “Modern Feminist” – Black Bra, “Total Abandon” – Heaven Honey, “Synthesizer Hearts” – Eve Maret, “Pool Party” – Tower Defense, “Fade Away” – The Medium, “Lockdown” – Fu Stan, “The Ballad of Dick Gregory” – The Watchman & thaPoet, “Bag/Purse” – $avvy, “Dieterich Buxtehude” – Spencer Cullum, “Tenderly” – Charlee,. I could go on but there’s just way too much to list.

Best streaming performance you saw this year?
Both Little Bandit and Tower Defense had unbelievably captivating shows streamed from The 5 Spot. More complex setups from Festival of Ghouls, DRKMTTR and Far Out Fest blew my mind with the volume of great performances. All that said, ‘dj_jimmy’ on Twitch on Saturday nights is truly the best kept streaming secret; a regular 80’s dance party straight from the Canvas dancefloor.