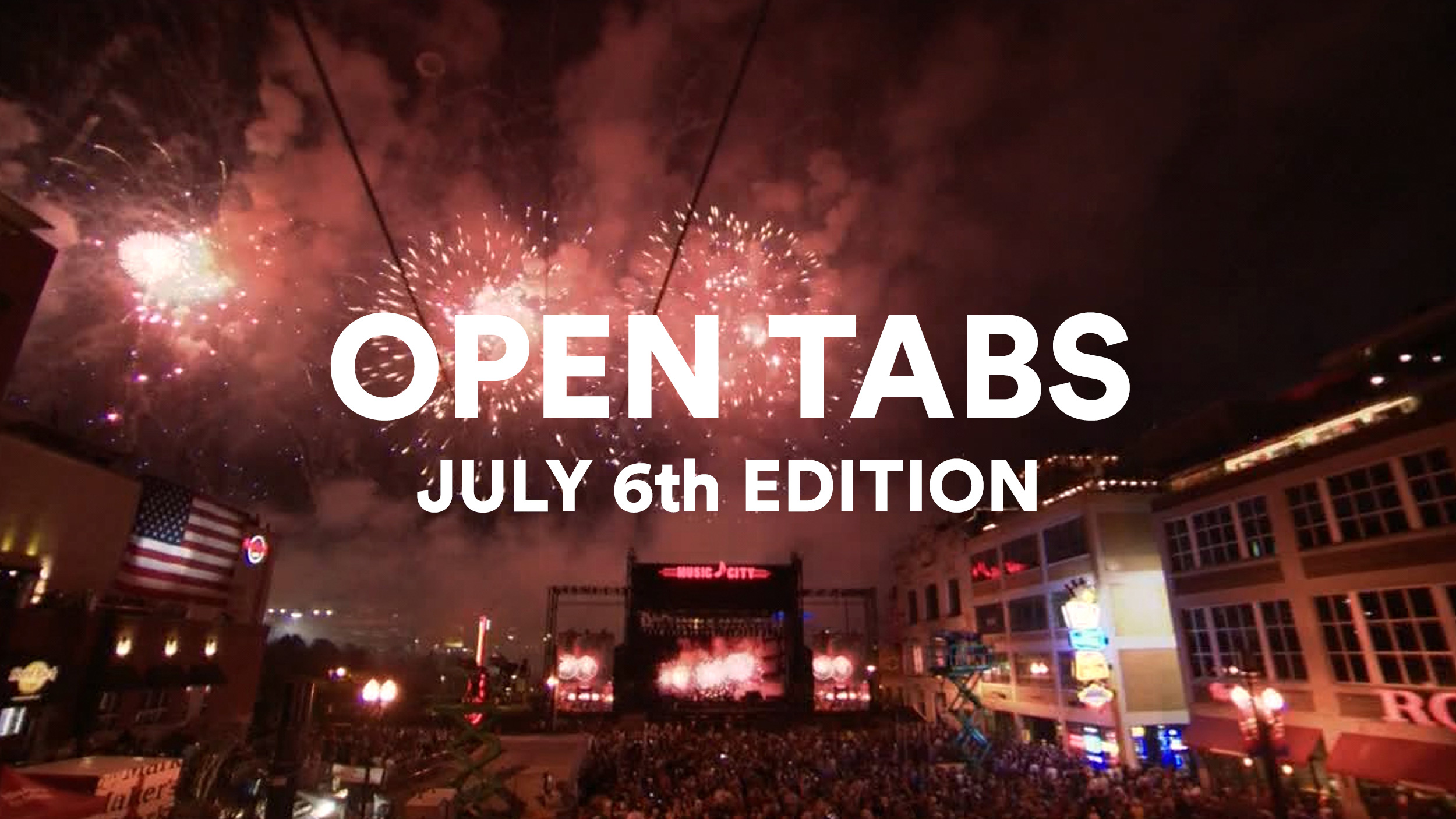 We made mention of it on the WOTT Music podcast but We Own This Town has been on a bit of a summer break! Sometimes you gotta reset and recharge to keep the engine running (it also doesn’t hurt that I, Michael Eades, got married and went on a honeymoon). Regardless of the reasons why we were on a mild pause, we’re back now! And there is a ton of great new music to catch-up with. Hopefully the Nashville Scene’s “Recent Releases” rundown, No Country for New Nashville’s & POPSQUAD’s ongoing playlists and WNXP highlights kept you plugged in but there’s always room for more.

Below are ten new tracks and videos that we’ve kept as open browser tabs just waiting to be fully soaked up but there’s a load of additional releases at the bottom of this post that we’ll be spending even more time with.

The official video for the title track off of Tayls Have You Ever? I’ve Always dropped and it’s a delightful time in a roller rink. Tayls has taken on the genre moniker of “Friendship Punk” and this track really embraces that vibe. It’s a wonderful balance of catchy, raw and loads of fun.

Look for the full album on July 31st, 2021 but, in the meantime, go stream a load of preview singles over on Spotify and read more about the video here.

You may have caught the excellent Lou Turner solo release, Songs for John Venn, back when it was released in early 2020 via cassette but Centripetal Force is giving it a proper vinyl re-issue and as part of the promotion for that release, they’ve unveiled this video for “Solar Eclipse.” The vinyl pre-order isn’t up yet but keep your eye on the labels Bandcamp to snag it when it does.

For fans of delightfully drifting indie pop touched with loads of flute, this whole album is an excellent backdrop for your lazy days in the blazing hot Tennessee sun.

Released in mid-June, this one almost slipped past us. Slow Pass is a brand new brand gearing up to release their debut EP High-Pass on August 27th with a new single coming out regularly in the lead up. “Parking Lots” is the the first of the batch but “Tuesday Morning” is coming out July 16th. Keep up with the new releases by following the band.

For fans of The War on Drugs, fuzzed out guitars, hypnotic bass lines and just the right amount of swirling keyboards. While it’s only one song that’s been officially released, it is clear that this is band to catch live and loud.

Gee Slab has been undeniably prolific as of late! Hot on the heels of his collaborative EP with Negro Justice, Resplendent, he’s also released his own solo EP Because I Can, a solo single entitled “Younng Blvck Gifted” and full feature with Top Prospekt entitled “Garnett.” We’ve gone with the video embed for the purposes of this post but you really can’t go wrong with clicking through on any / all of the releases.

The video follows Slab on an adventure through LA visiting dispensaries, performing live and generally living the life. The track is laid back and lays a funky space for Slab and Prospekt’s flow to shine.

Following up on his Searching for Shiloh release, Virghost drops a new single that blazes through criticism. His lyrics on this one are absolute fire – particularly the line “if you got a small catalog, don’t speak to me.”

Hip-Hop has always excelled at putting off the haters and proving an artists skills by actually demonstrating them and Virghost absolutely embodies that practice.

If you missed the Dee $ouf 2020 release The Jake Gittes EP or his numerous singles, you’ve got time to catch up before the release of his new tape Eagles Donâ€™t Soar With Pigeons.

The first track from said forthcoming release, “Fried Rice,” was produced by Burm and sounds like it’s going to be the best release from $ouf yet. The beats elevate this track with throwback flourishes and dancey bass while $ouf’s lyrics ride the line between highly personal and cuttingly boastful. The title of the release is a nod to throwing down the gauntlet to $ouf’s skills and it sounds like he’s going to deliver on that promise, soaring like an eagle.

Wilby caught our ear with a random single released in the fall of 2020 entitled “Bad” and followed up this Spring with a series of singles including “Mush,” “Joanna” and “Translucent Beauty” – all of which we unabashedly loved. There wasn’t much of a clear indication at the time if these songs were part of a larger release but it’s with great joy that we can share the release of the Translucent Beauty EP; which compiles all three of the aforementioned tracks and an EP only track for “Naive.”

These songs have a sweet melancholy that is hard to pin down – they’re self-deprecating, self-reflective but with a silver lining of optimism running throughout. They’re all carried wonderfully by Wilby’s vocal delivery and beautifully nuanced tracks that beg repeating. Safe to say, we’re big fans.

Occasionally you run across something on Bandcamp that defies all logic. In the case of New Bang, we seem to have stumbled upon the first single from a forthcoming release entitled Ultimate Tiki Beach Breaks, which promises to be “a Surf-Influenced exploration of Hip Hop Exoticism.” How could this exist? And how could it possibly successfully mix such styles?

We don’t have the answers to these questions but can confidently say that we’re fully intrigued. This first release, “Mystic Grind,” certainly delivers on the synopsis – it’s a surf-influenced exploration of hip-hop break beats and it only gets more interesting with each remix that is provided. There’s not a whole lot more to say about this one yet but we can’t resist recommending that you follow this project immediately.

Self-described as “experimental shoegaze,” Kentucky Derby Con Man is a somewhat new outfit around town and their debut, self-titled, EP delivers on that promise. The five song release is a big wall of sound, fuzzed out in all the right ways that you’d hope for a shoegaze record to be but it sprinkles in plenty of surprising instrumentation and flourishes that you wouldn’t generally hear from a “stock” shoegaze release. Having listened through a few times, this is best experienced with your volume knob cranked as far as it will go.

All of the music we feature on We Own This Town is meant to shine a light on the diversity of the Nashville music scene but it bears repeating here; this is big, immersive, shoegaze coming out of “Music City” and it is good. If this band doesn’t play a show with Tape Deck Mountain, something is wrong with the world.

Little fun fact for you: Future Crib released an album in 2019 entitled Friends and the title track is a highly overlooked gem. That’s a subjective take so maybe “fact” isn’t the right word to use but Future Crib is one of those bands that, unfortunately, flies under the collective radar too often.

The band just released the single “Most Likely Never Going to Die” from their forthcoming new album Full Time Smile and it clearly has the potential to be another highly repeatable ear worm that you’d be remiss for overlooking. The album is set for release on September 10th, 2021 and you should just go ahead and pre-order it now.

That’s ten recent releases worth checking out but far from exhaustive. We’ve also got our ears open to new music from Wallis Allen, two new tracks from repeat repeat, Trash Man, Juan Solorzano, blaqspace_, Gummy Soul featuring FU Stan, Bobby Peppermint and loads more. It’s an avalanche of great music and trying to keep up with it all is a great problem to have.