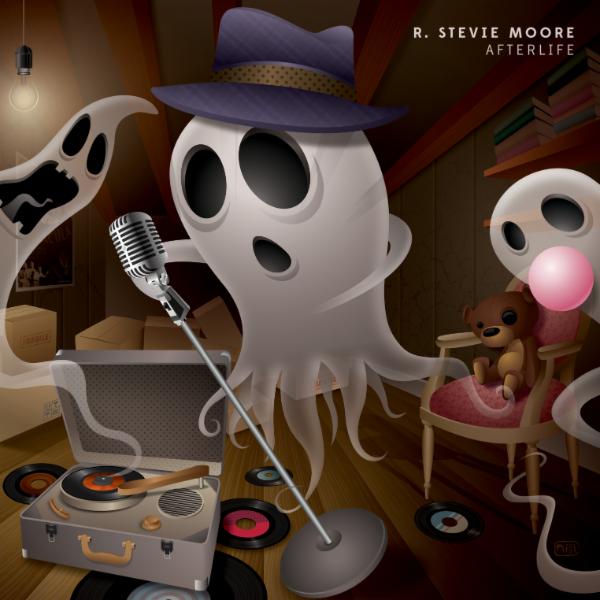 As has been mentioned on this site many many times before, R. Stevie Moore is responsible for a baffling amount of recordings. One look at his Bandcamp page would reveal three hundred and sixty-eight distinct releases and that’s not even everything he’s done. The quality of this massive tome of recordings, surprisingly, leans more into Quality than it does Quantity.

All that being said, his latest release, Afterlife, is a bit of a different beast. Sonically, it’s a much glossier affair than his general DIY home recordings. The songs were recorded over the past 15-years across five different states. Even the artwork is more polished than what Moore general puts out into the world. Many of the songs appear on previous releases, tho they’ve been repolished here for sonic cohesion. The Bar/None marketing says this R. Stevie Moore’s Loaded, an album of hits with no filler. There’s a handful of guests on the record as well – notably Ariel Pink and Jason Falkner, who have collaborated with Moore on past albums.

Afterlife, more than anything, is a gateway drug to the world of R. Stevie Moore. There’s no room for complaints about weird voicemails, skits or lo-fi recording quality; much of which makes Moore so damn charming in the first place. These songs prove that Moore’s songwriting and pop skills work no matter the sonic fidelity. In fact, these songs are more than just catchy, they’re interesting.

Portions of the album seem to pay homage to some of Moore’s favorites – like “The Winner” harkening back to poppy XTC & Bob Mould or “Here Comes Summer Again” being a clear Beach Boys nod. These tributes are never insincere and still come drenched in plenty of Moore’s own style.

There’s no definitive R. Stevie Moore album and never will be. Capturing everything he’s capable of and great at, with all of his variety of styles, just wouldn’t fit into one thing. Fortunately, Afterlife does a wonderful job of serving a delicious appetizer into the full course, should you choose to partake.