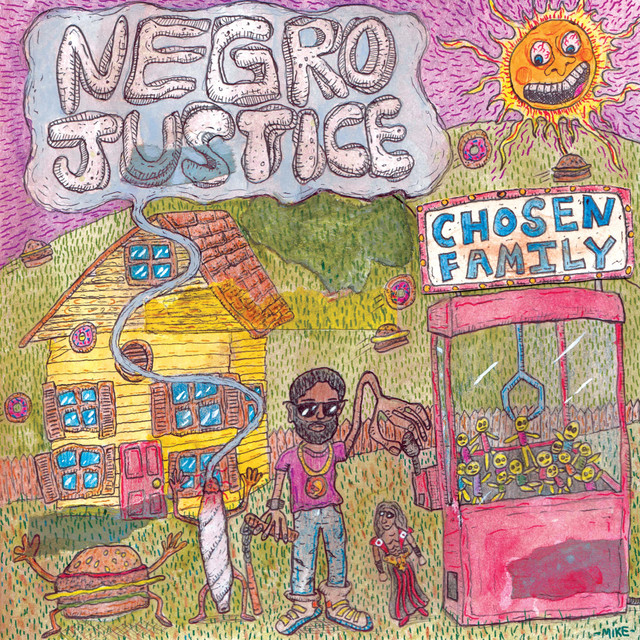 We’ve been following Negro Justice for the past few years ever since stumbling upon his Bandcamp release The Stimulus EP. Over that time he’s churned out additional releases such as The Second Stimulus Package, Two Ronin, the Father Figure EP, “Dutch Master’s Thesis,” the Gee Slab collab EP Resplendent and more. It’s an impressive body of work for a relatively short period of time, particularly considering that each release showcased a progressive improvement in lyrical content, production and overall confidence of delivery. It’s what you hope to see from any artist; honing their skill over time. With the release of Chosen Family, Negro Justice has leveled up once again.

Working with Aaron Dethrage of Six One Tribe, Just Vibez, Cal Cuttah and a host of featuring performers such as Gee Slab, BLVCKWIZZLE, Corduroy Clemens, FU Stan, Chan Tate, Amber Woodhouse, Rio Tokyo, HB Mandella and a plethora of voice mail contributors all speaks to the core thesis of the album that Family is those that you choose to surround yourself with, not just a collection of people you are born into. Don’t be fooled by that hefty list of appearances, this is a Negro Justice album that puts Justice’s baritone style, clever wordplay and a cornucopia of videogame and movie references front and center. The additional contributions augment Justice’s style and improve the overall track, exactly what you’d hope for from a supportive family.

The album was conceived as an album; a listening experience meant to be enjoyed from start to finish. From the opening message from Amaze88 to the, honestly, tearjerking ending Outro, there’s a throughline of supportive messages and encouragement. Beyond the conceptual elements of the record; there’s also a massive sonic upgrade. The record is big and full; the mixing and mastering here was clearly done with the utmost care. The beat selections are as memorable as they are diverse. There’s even a solid amount of horns, largely in part to Amber Woodhouse’s phenomenal saxophone appearances. If I had to guess at what a Negro Justice full-length would have sounded like, Chosen Family completely upended those expectations and delivers something different, fresh and wildly immersive.

Dissecting the album track-by-track is a job for a different review (or a podcast) but there isn’t a period of time during playback that drags. Chosen Family comes out of the gate swinging with “No Throwaways” and makes good on that promise for the duration. One might be compelled to point out tracks like “George Jefferson Strut“, “Work in the Morning” or Room Fulla Elephants as stand outs but the fact of the matter is, every single track is compelling.

The Nashville Hip-Hop scene has been slowly gathering steam overall for the past few years. Albums like Brian Brown’s Journey, Reaux Marquez NO ROADS, Namir Blade’s Aphelion’s Traveling Circus, Petty’s #53Weeks project, Mike Floss’s Oasis, Ron Obasi’s Sun Tapes and so many more have been chipping away at the national awareness of Nashville’s ability to create great hip-hop. With Chosen Family, Negro Justice will now be on the list as well.